In the past months since the Covid-19 outbreak, we have seen an enormous rise in mal-spam campaigns where hackers abuse the pandemic to try and claim
Ben GrossThreat Researcher

In the past months since the Covid-19 outbreak, we have seen an enormous rise in mal-spam campaigns where hackers abuse the pandemic to try and claim victims. One such campaign that we spotted is a new variant of a unique malware loader named ‘Aggah’.

Aggah is a fileless multi-stage malware loader which utilizes dual-use tools along with free and open web hosting services such as Bitly and Pastebin to hold its resources. Most of these resources hold HTA scripts with embedded PowerShell scripts that run one after the other, until the drop of the final payload which in our case was one of the following spyware strains:

A previous campaign, with similar characteristics, was recently published by Talos in April where they observed a malspam campaign that was used to distribute remote access trojans (RATs). In their discovery they noted that the infection chain was highly versatile and could be adapted towards different malware payloads. The attackers were also using publicly available infrastructure, like Bitly and Pastebin to direct and host the attack components.

The use of Pastebin URLs to store the resources of the malware is used as a fileless technique. Almost all Aggah’s PowerShell scripts will be written into the registry as MSHTA commands with a Pastebin URL. This means that during the attack sequence there are no malicious binaries written to the disk, making the attack fully fileless.

In this new variant of Aggah, we have seen some interesting behavior not only from a technical point of view but what appears to be a veiled attempt at self-expression. Strings extracted from analyzed files reveal traces of the malware author. It seems the author of Aggah is trying to provoke security researchers by leaving conspicuous code variables and strings such as:

The following section of the blog will describe in detail the infection flow of the malware. 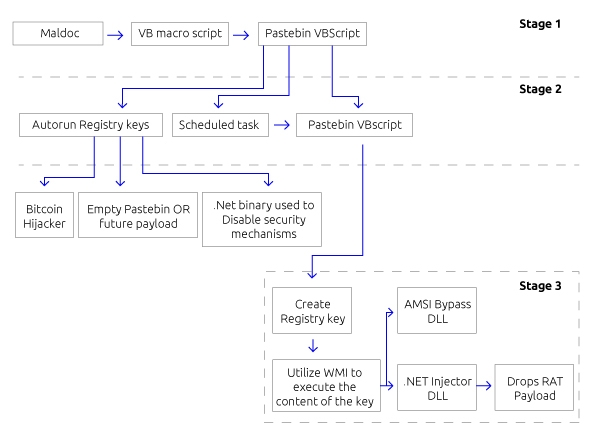 Aggah is distributed by Microsoft Office documents with malicious VBA macros in them. In this campaign we have seen several PowerPoint presentations, some with Covid-19 related names, and others are invoices. The presentations are usually empty of content, besides a short and simple VBA macro that uses a StrReverse function to evade basic detection by AV products. Once opened it downloads the next stage of the malware via the “Shell” command.

The Bitly URL at stage one will redirect to a Pastebin page which holds a VBScript, the second stage of the infection.

The second stage is carried out as follows:

1) Runs stage three of the malware by the command: (its role will be mentioned as ‘Stage 3’)

The registry key’s content point to yet more several different Pastebin pages that hold more VBScripts with the following functionalities:

Bitcoin Hijacker, which has not yet been publicly reported, is a simple clipboard hijacker, which uses regex to search for copied clipboard addresses and replace it with one of four hardcoded bitcoin addresses of the attacker.

b) Run one of the registry autorun keys that was set previously via WMI. Usually it is the Bitcoin Hijacker, it varies between different samples and sometimes points to a Pastebin URL with no content at all.

c) .NET binary which uses CMSTP.exe technique. CMSTP.exe is a command-line program that accepts an INF file and installs it as a leveraged service. Aggah uses this technique by extracting an INF file from the binary resources and uses it for privilege escalation and AV evasion. It does so by setting various registry keys and ensuring that the process is running with elevated privileges. Some of its capabilities are:

Part -1- at stage two will execute a VBScript which will create a registry key, set its content with a PowerShell script and execute it via WMI. The PowerShell script is responsible for loading three binaries into memory:

2) .NET based DLL which loads the RATs payload by its own exported functions

3) Execute the malware payload by Injecting it to a benign process (e.g InstallUtil.exe)

The PowerShell script holds a couple of byte blobs that will get decoded and decompressed to reveal the 2 DLLs. They will be used by the malware for both AV evasion and as the final payload dropper.

1) AMSI bypass DLL: AMSI which is a Windows interface that allows applications and services to integrate with any antimalware products present on a machine. After bypassing AMSI the attacker will be able to elevate privileges such as: UAC, PowerShell scripts, VBScripts and more.

2) .NET injector DLL which is used as the main loader of the RAT's payload. The Injector DLL will use its own API to load the RATs payload into a legitimate process after it is being downloaded and decoded, by creating a suspended process and injecting the malware payload to it using process-hollowing. In this campaign we have mainly seen the use of InstallUtil.exe as the benign process that will be hollowed and injected into. InstallUtil.exe is a legitimate Windows software for installing server resources, which is simply used as a host for the malware payload.

The payload of Aggah might be any kind of malware, in this campaign Aggah authors use Agent Tesla and Remcos RAT as their final payload. However, it is this versatility that heightens the risk potential of Aggah to organizations, as it can be used to load many different types of malware.

Evidence of a Hidden Creator

Since Aggha’s emergence in December 2019, it has undergone several updates and changes in its capabilities, the implication being that there is a team behind its development that continues to work on it and improve it. Aggah’s provocation directed to the security community appears to be an attempt to build their presence and gain recognition among hacker forums and Twitter, which has become a significant platform for security researchers and malware authors alike.

Aggah is indeed a complex malware that utilizes several dual-use tools such as PowerShell, MSHTA and CMSTP in order to infiltrate a system, and attack through a fileless attack sequence. This may be a serious threat for organizations as it has successfully bypassed many next-gen security products.

Using its advanced Deep Learning-based static analysis and behavioral capabilities, customers of Deep Instinct can rest assured that they have protection against Aggah as the attack is detected and prevented in a matter of milliseconds.