ServHelper is a recently discovered backdoor associated with TA505. A veteran threat group that has also been associated with the infamous Dridex banking malware, the GlobeIimposter ransomware, and other high-profile malware campaigns.

Since this vector came to light it has gained some traction, although it is still not widespread and is used by only a handful of threat actors.

Attack Flow
Once the malicious Excel sheet is opened the Excel 4.0 macro is executed and msiexec.exe is called in order to download and execute the payload.

Excel 4.0 macro snippet, msiexec.exe is called to download and execute the payload. (cropped from oledump.py)[/caption]

ServHelper’s payload, an NSIS Installer signed with a valid digital signature (further details on the certificate ahead), is downloaded by msiexec.exe to its temporary folder (C:\Windows\Installer\MSI[4-charachter-string].tmp) and executed.

Once the dropped payload is executed, it will drop a DLL file contained in the installer to \%TEMP%\xmlparse.dll, and use rundll32.exe to call the DLL’s exported function “sega”.

The malware will then write a base64 encoded PowerShell script (which is contained in xmlparse.dll as a resource) to \%TEMP%\enu1.ps1 and execute it. The script, intended for reconnaissance purposes, checks if a machine is part of a domain and if the user has Admin privileges or is part of the Admin Group.

ServHelper can receive several types of commands from its Command & Control server, including:

Signed Payload and Core
Both the NSIS Installer payload and ServHelper’s core DLL are, at the time of writing, signed using a valid signature. 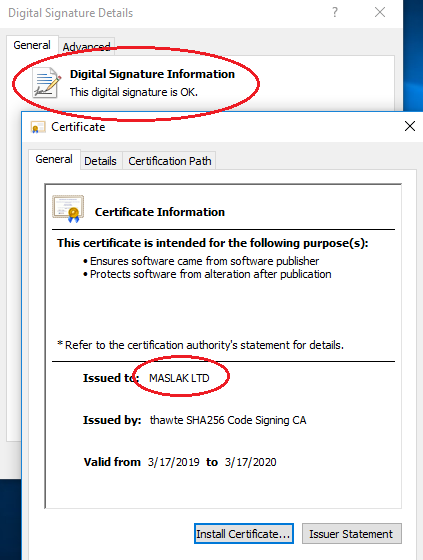 The certificate used to sign the malware was issued to “MASLAK LTD” of Uxbridge, Great Britain.

While this appears to be a legitimately registered company, further investigation is required to determine the validity of the certificates or whether they have been compromised and the possibility of MASLAK being a shell company.

Our analysis of “MASLAK LTD” certificates reveals another certificate issued by them that was previously used to digitally sign malware, although it has since been revoked (certificate details are provided in the IOCs section).

Conclusion
TA505 is a highly advanced global threat actor. It employs a vast array of sophisticated, constantly developed malware for different purposes, for which it exploits the most recently discovered and publicized weak points.

This, factually, pays off for TA505. The evasive and legitimatizing factors described above, whereby a dropper employs a lesser known and poorly detected old-school technique combined with a validly signed payload and malware core, all contribute to its evasiveness. When this variant first appeared on VirusTotal it was almost completely undetected. Below are links to each component’s initial detections at time of upload:

Deep Instinct Threat Research contacted DigiCert (who operate Thawte CA), and was notified that an investigation into the malicious certificate has been initiated.

Following conclusion of our initial analysis of the described ServHelper variant, Deep Instinct has noticed an uptick in ServHelper’s activity, with new droppers and infection URLs appearing in the wild, a new mildly modified payload and core signed with the same certificate, and an additional Command & Control domain (new indicators have been updated in IOC section).

Deep Instinct has been notified by DigiCert that following Deep Instinct’s report, the certificate used in this ServHelper campaign has been revoked.