Agent Tesla: A Lesson in How Complexity Get’s You Under the Radar

Agent Tesla is a prolific strain of spyware, that is being sold online since 2014. It is advertised in dark-web forums as a legitimate monitoring soft
Guy Propper

Deep Instinct’s Research Team recently came across a very interesting infection chain found in one of our production sites. The uniqueness of the infection chain is due to its long and inordinately complex process; starting with an RTF document attached to a phishing email, it ends with the dropping of an Agent Tesla executable on the victim machine. The multiple stages of the infection process include the use of OLE Objects within the RTF document and the execution of obfuscated VBA code contained in OOXML packages within the OLE Objects. In turn, the VBA code executes Powershell, which finally drops the malicious executable. Dozens of similar RTF droppers were found to be active very recently, possibly indicating a wide attack wave of Agent Tesla, utilizing this infection process.

The full infection flow is explained in the following diagram:

The infection chain begins with the execution of an RTF file, which arrives as an attachment in a phishing email. Once executed, the user is presented with five consecutive requests to enable macros. The five requests are due to the fact that the RTF contains five embedded OLE objects, which each contain an OOXML package. Inside each OOXML package lies a VBA macro, and when the user enables macros, one of the macros will execute at a time. 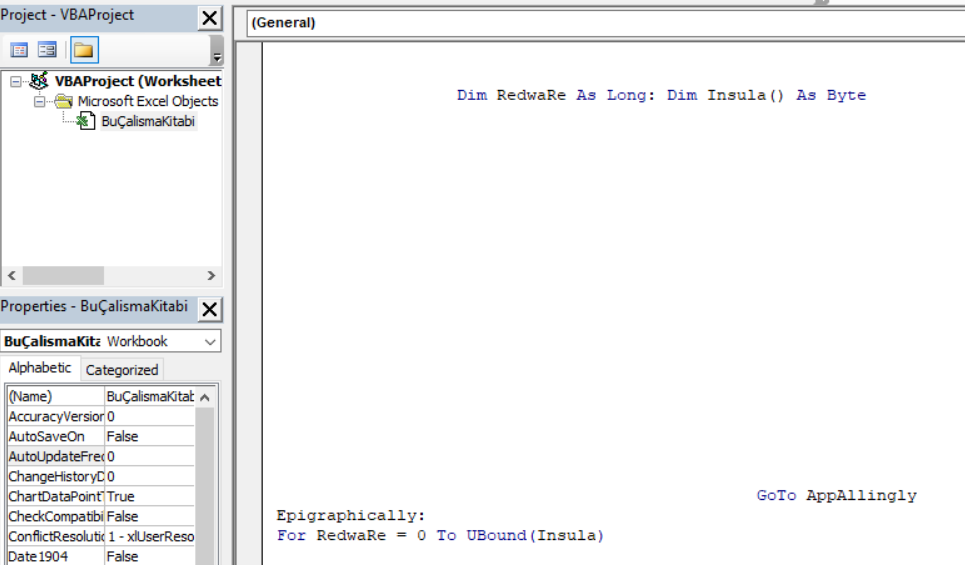 To hinder static analysis of the code, the main variable used in the code is contained in a specific cell of the spreadsheet in each OOXML package. The variable is a long obfuscated string, which can be found in xl/sharedStrings.xml in the OOXML package.

Indeed, static analysis tools such as oletools and oledump did not help in providing any details regarding the functionality of the VBA code. In addition, dynamic analysis of the VBA using ViperMonkey was not successful. However, manual debugging of each of the five VBA code parts revealed that each part is responsible for creating part of a PowerShell code, which will form the next stage of the infection process.

A snippet of Powershell code created from the execution of the VBA macro in the first OLE Object.

Once all five parts are run, the resulting Powershell code is executed.

The PowerShell code formed in the previous step is highly obfuscated

After debugging the code, which is deobfuscated through the function af23a, it is still obfuscated, but its function becomes clear – the main purpose of this PowerShell code is to attempt to bypass AMSI, and download a file using WebClient().DownloadFile.

The AMSI bypass is attempted through the provision of an empty buffer to the AmsiScanBuffer function – the strings which are relevant to the bypass are the red squares in the above image and can be deobfuscated using function af23a in the PowerShell script. This has already been attempted in the past by a very similar Agent Telsa infection process.[1] The URL which is accessed to download the file, which appears obfuscated as the string '09411248125b1a495b0d044707560e0753075b040c1b05570c4e5b04501804470217030e580416041950', is de-obfuscated to "hxxps://cleranoffacem[.]com/nbhyerd/bomb[.]exe" (blue square in image 4), and the file downloaded from this URL is Agent Tesla, which will be overviewed in the following section.

The AgentTesla executable is download from hxxps://cleranoffacem[.]com/nbhyerd/bomb[.]exe to AppData\Roaming\u565.exe. Then, the executable starts performing several tasks:

It is interesting to note that a very similar infection flow involving an RTF file that contained five OLE Objects was identified in March 2018.[2] In that instance, the file that was dropped following the infection chain was Lokibot. Considering the striking similarity between the two cases, it appears that the attack was either executed by the same actors or created using the same framework. However, we could not find data to further elucidate the greater likelihood of the two options.

In addition, despite this method being several years old, it is apparently still used effectively in the wild, with dozens of similar RTF files found in a recent attack wave.

The sophisticated and complex infection chain covered in this article, while not new, is still being used extensively in the wild. This indicates that a complex attack chain, involving many stages, is not only difficult to analyze but can also help attackers evade detection. In this case, evasion may be achieved through the use of multiple stages, each responsible for only a small portion of the attack, making each stage more difficult to detect. In addition, in this attack, and many other attacks in recent years, internal Windows tools are being abused by the attackers. In this attack, the tools abused were schtasks.exe, reg.exe, and netsh, evidence of the continued trend of attackers to abuse dual-use tools.

Deep Instinct’s customers are protected from this threat, which is prevented at multiple execution stages. The initial RTF dropper was prevented in production pre-execution, using deep learning-based static analysis. Moreover, this RTF dropper was prevented with Deep Instinct’s prediction model (D-Brain) released more than 20 months prior to the appearance of this dropper. If the dropper were to execute, PowerShell execution would be prevented with Deep Instinct’s script protection, and the Agent Tesla executable is prevented both statically using the D-Brain, and dynamically using advanced behavioral analysis protection.